Seminis has been busy trialling new sweet corn hybrids for the Australian market. With a focus on leading disease packages, good cob characteristics and outstanding yield potential, Seminis hybrids benefit from a global network of breeders and technology development specialists who use their expertise to develop new varieties that meet grower needs.

Great varieties need great seed production partners, which is why Seminis has been working with Gippsland Seed Services (GSS) to produce sweetcorn since 2017. Marni Riordon is the Production Manager for GSS, based in Orbost, Victoria.

Local to the area, Marni has worked with GSS for many years, initially as a summer casual and then as a Production Agronomist. She took over the Production Manager role in October 2018 and is about to commence her second summer production season.

“We’ve been working with Seminis since winter 2017 to produce sweetcorn seed for the Australian and New Zealand markets. 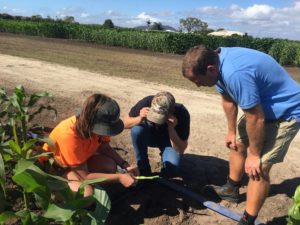 “Seminis selects the varieties they want to advance and bring in parent lines from the United States to the South Australian Research and Development Institute (SARDI) Plant facility for grow-out. All seed is tested for any GM-presence, disease and viroids and then hand pollinated. Once clear, seeds are released for production,” Marni explains.

GSS aim to produce seed all-year round, with summer production in Orbost and winter production in Bowen, North Queensland.  GSS also work with Pukekohe based Seed Solutions, in New Zealand.

“Production in New Zealand is identical to Australia. In each production site we have an Open Field and Nursery set-up. We have anywhere between 1 and 20ha in the open field and in the nursery, we use hand pollination and do smaller scale productions as well as bulk-up in-bred parent lines.

“All seed produced in New Zealand comes back to Orbost where it is husked, dried, shelled, graded and then packed on behalf of Seminis for commercial sale. The New Zealand production is vital because we can move seed freely between Australia and New Zealand, it allows us to smooth risks from our Australian operations”.

Based on the Snowy River, GSS are fortunate to have a reliable water supply, however that doesn’t mean there aren’t challenges.  Climate variability has made the production cycle more unpredictable and GSS are taking sustainability seriously.

“For example, there were two days over 45 degrees in Orbost last year which is unheard of. To ensure we can deliver water at critical times, we invested in sound irrigation infrastructure, such as centre pivots and trickle tape.

“It’s important we take climate variability seriously and do what we can at our end to get a healthy crop through from start to finish. We are also lucky to work with growers who understand and take the challenges as seriously as we do.

Soil health and biodiversity is also a priority, with GSS using cover cropping prior to planting to improve soil health.

“Typically, the crop rotation was corn and then to rye grass for silage, then back to corn. In recent seasons, we have looked to mix species and cattle for grazing to improve soil biodiversity. We have also begun to incorporate different cultivation practices such as strip tilling, to reduce soil disturbance, preserve soil moisture and improve health,” Marni said.

Acceleration is the first of a new generation of Seminis sweetcorn, proudly produced by Gippsland Seed Services. For more information on Acceleration, or on any other Seminis varieties, visit www.seminis.com.au/resources/seminis-sweet-corn-resource-library/