Capsicum growers have a new tool to manage Root Knot Nematode, thanks to the arrival of new blocky pepper variety, Halifax.

At a recent variety demonstration event in Bundaberg, Halifax proved itself as a standout performer in terms of its production potential as blocky capsicum and as a tool to fight Root Knot Nematode (RKN) incursion. Nematodes are worm-like organisms, parasites of plants, which feed and reproduce inside the plant root, compromising yield by putting stress on the plant root system.

Halifax, a high performer in the Warlock slot…

“The purpose of the experiment was to determine the efficacy of the Halifax capsicum nematode resistance by removing standard soil treatments for nematode, C35 Telone and/or Metham Sodium and evaluating the yield compared to the industry standard variety Warlock with no stated nematode resistance,” Lewis explained.

“Overall Halifax out-performed all varieties in trial with regards to yield. Halifax achieved a total of 90.74kg of marketable fruit from 60 plants assessed in Trial One and 101.92kg in Trial 2.

“While the colour and firmness of Halifax and Warlock are very similar, the Halifax plant was more robust and vigorous with a better canopy structure,” Lewis said.

Comparisons of the root systems of both varieties (Figure 1) show the greater root mass of the Halifax plant and reduced nematode damage and the obvious galling and stunted root system of the Warlock plant due to nematode damage. 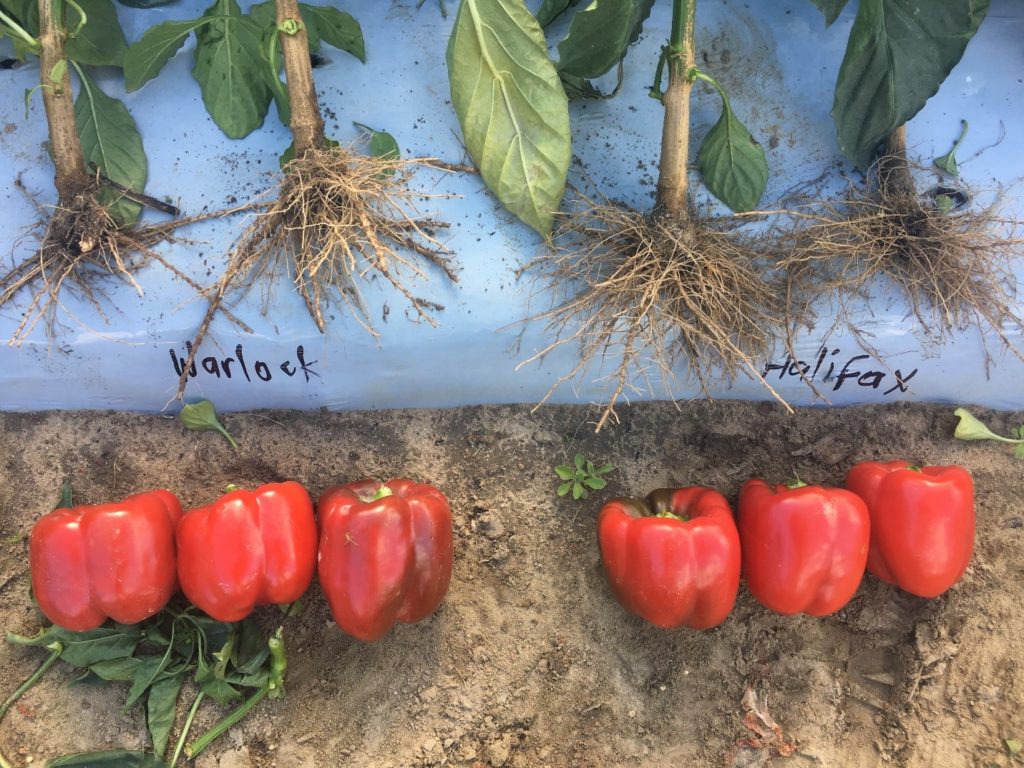 Chris Themsen of Agreco Australia, is an independent nematode export. Chris believes Halifax’s intermediate resistance to RKN offers growers the opportunity to reduce time and money spent on costly fumigants and instead move to an integrated RKN management program.

“Economic thresholds provide a guide to the potential of economic loss and are a method of predicting the risk of yield loss. Once the economic threshold is reached or exceeded, a management plan should be implemented to reduce the RKN population.

Nematode pressure can vary from field to field across the same farm so Lewis, urges growers to use sampling and establish a baseline understanding of nematode counts and economic threshold.

“Typically, management of RKN in cropping systems can be challenging and requires the use of multiple cultural and chemical strategies for effective management,” he explains.

“An integrated RKN management program is based on monitoring, utilisation of resistant cultivars, cultural practices such as bare fallow and chemical control.

“Fundamentally, it should focus on a range of useful control options, must be sustainable in the long term and finally it should lower RKN populations to levels that reduce economic loss,” Chris says.

“Resistant cultivars have an important role to play and should be considered by growers who are looking to reduce costs and time associate with controlling nematodes.